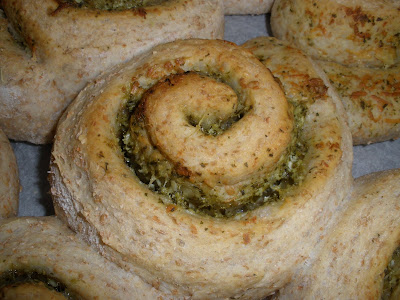 Last night was the first time I've ever attempted to cook anything with yeast. I'd rate my bread 6 out of 10 - it was kinda heavy.

However, I choose to assume that the recipe was flawed, not me! So tonight I'm having another go at bread.

It's easier than I thought, just time consuming. By no means do you need a bread maker. The only advantage with one is that it can cook the bread while you're not looking.


Start with about 4 cups of bread flour. You can substitute some of this for wholemeal flour, but no more than a cup or so. Bread flour creates a much stronger mix so your bread will hold its shape.

Add a sachet of dry yeast (8g). Mix all the dry stuff around. Yeast looks funny close up. 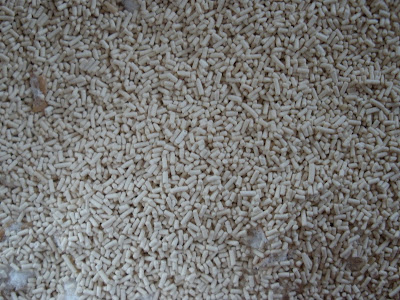 Add a cup and a half of liquid at body temperature. It will feel lukewarm. You can use all water, or substitute some for milk if you want a softer bread. You can even substitute a LITTLE melted butter.

Interestingly (although not for the queasy), the reason you need to have the liquid at body temperature is because the yeast thrives (it's ALIVE!) at 37 degrees. Thanks to some of Dad's former colleagues, I learned (second-hand) the following facts about yeast:

Anyway, back to the bread.
Mix all the stuff together with a great big wooden spoon. Turn it onto a floured surface. Knead until it's no longer sticky, and it's kind of elastic. If you need a bit more flour, knead it in by sprinkling it on top. 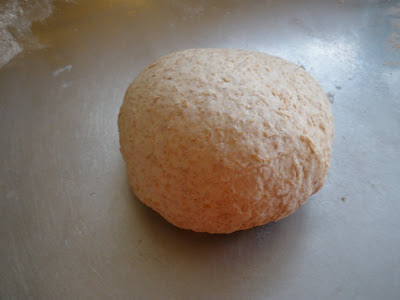 Prove your bread in a bowl coated in a little cooking spray, and cover the bowl with a tea towel. Leave it for about an hour.
Proving is when you leave the bread dough to rise. It needs to be somewhere warm. If your house doesn't have a warm sunny place (like my dank rental), heat the oven to 50 degrees with a bowl of hot water at the bottom. Turn off the oven and put the bowl of dough in.
Roll the dough into a square, on a floured surface again. Spread your toppings on it. 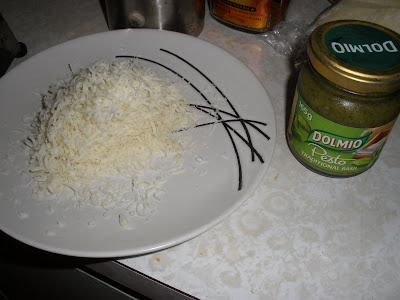 Mine are pesto and goat cheese, but you could use whatever you like... pizza sauce, Vegemite... I reckon you could even do sweet ones with some grated apple, cinnamon sugar... whatever! No harm in experimenting. Unless you eat it and it tastes awful.
Roll the dough up into a log, and cut slices off it. These are your scrolls! 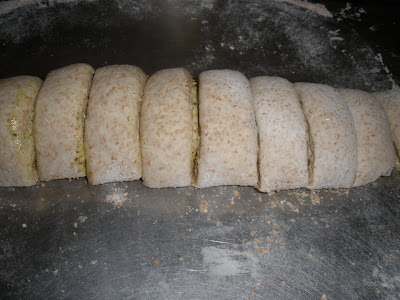 Put them on a lined or greased baking tray. 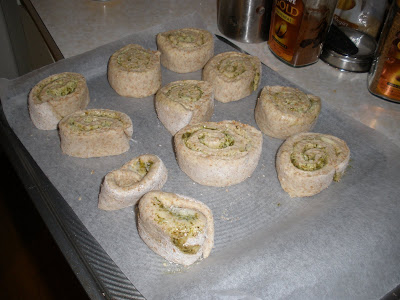 Prove them for another hour or so (this is where the bread maker can be useful... it mixes and proves it all for you, which could be done while you're asleep or at work...).
Look, they got bigger when I proved them! 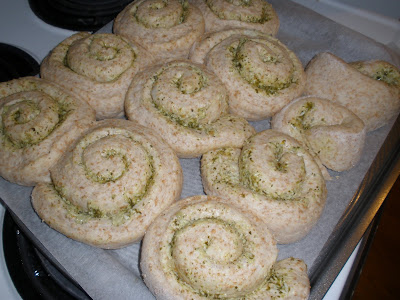 Then cook 'em at 200 degrees for about 15 minutes. Or, you know, until they look done. Like these! 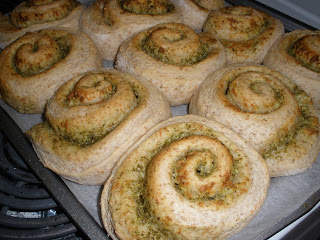